‘Flagging’ or ‘down-voting’ is a way to show disapproval for a comment or post. Flags are meant to be used on posts/comments a user does not approve of. The reason can be that the post is spam, the author plagiarized it, etc.

Essentially, it is the opposite of up-voting a post. When a post receives an up-vote, the writer gains rewards proportional to the strength of the up-vote (based on the Steem Power (SP) of the voter). By approving of a post or comment and positively voting for it, users grant the writer a combination of Steem blockchain-specific tokens which equate to varying amounts of fiat or other cryptocurrency.

Flags or down-votes are the exact opposite. While they can’t take money away from a person, they can negatively impact the projected amount to be earned from a post, reduce the author’s reputation, or hide the post from visibility.

As aforewritten, flags are meant to be used to show disapproval. When Steemit launched, the majority of users were tech-savvy and familiar with how online communities function. They were on the platform to share information, take part in a new project, and to earn a new type of token. They largely understood how Steemit works, what a blockchain is, what Steem is, etc. When they flagged posts it was to make sure only quality original content ended up on the platform and to convey their dislike for some types of content. Often it was to correct someone’s mistake — like using the wrong tag, for example, or to ensure copy/paste content was not rewarded.

Currently, over a year later, Steemit is full of users who only know that they will get paid for blogging. While they’re trying to learn how to use Steemit and all about the Steem blockchain, it’s an uphill struggle. When they see up-votes on their post they only see the value beside the dollar sign. They don’t realize that currently, the value of the post is decided within a span of 7 days, not instantly. When that value decreases or the post is hidden because of a flag, they become very upset. Often they don’t understand what happened or if they did anything wrong. They take every flag like a personal attack on their wallets.

Flagging was always meant to be used as a curation feature and not as a weapon. Bots that flag do so because their owners disagree with the way a blog is managed (ie. the blog only posts content stolen from other users) or the content of a post. These bots operate either off a list or another algorithm that allows them to automate their actions. There is currently no known person or bot who goes around throwing random flags blindly. Even scammers who retaliate for flags against them do so to protect their racket.

A frontend is a website and the backend is the Steem blockchain that stores all of the information. Steemit.com is the main frontend for the Steem blockchain. Other frontends include Busy.org, etc. Different frontends deal with flags or down-votes differently. On Steemit, the post may be hidden from view. On another site, the post remains visible.

On Steemit.com a down-vote is a “Flag”. It can hide or gray-out a post.

On Busy.org a down-vote is a “Dislike”. It has no impact on the post’s visibility.

No. Flags are meant to be a way for a person to show that they disapprove of certain content on the Steem blockchain and/or want to prevent the person who posted it from receiving rewards for posting it. It only becomes a form of abuse when a user maliciously flags all posts from an account irrespective of what they are, particularly when that person is a whale and harms an account just because they can.

That being said, if a minnow gets into an argument with a whale, and they flag each other back and forth, it is not abuse when the minnow loses. Both parties became involved in the argument on their own accord and one lost.

Flags can be issued at 100% of a user’s Voting Power (VP) or at a smaller percentage. The impact of the flag is dependent on the flag’s strength (percentage of down-vote + issuer’s SP + issuer’s reputation value). 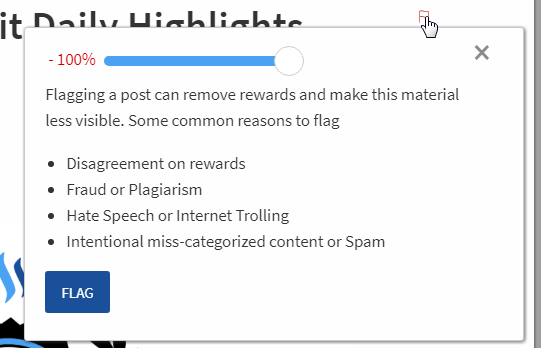 Since flagging costs VP, different users use different severity flags for different reasons. For example, a user may use a 1% flag to tell a minnow that they’re spamming a tag by wrongly utilizing it. A 1% flag can also be symbolically thrown between two whales to show disapproval. Or they may use a 100% to hide a post on Steemit with malicious links in it.

The user who issued a flag (or a down-vote) can remove it if the post/comment. No one else can remove the flag.

To remove a flag on Steemit, simply go to the post and click the little red flag on the top again. It will become clear.

A flag may be removed because the issue has since been resolved, the person changed their mind, or for any other reason the flag issuer saw fit.

Flags can only be removed up to 12 hours prior to post payout. Removing a flag afterwards will not reinstate rewards.

There are numerous ways to recover from flagging.

Address the reason for the flag

If your post was flagged because you posted a bunch of stolen photos, stop posting stolen photos. Take a day to think about what you can do to post things people will want to see instead or learn how to properly cite material that is not yours.

Resteem for a while If you got into a big flag war with someone you can stop posting your own material and instead find posts that you like and resteem them. When you resteem you help curate; meaning you receive a portion of the rewards that post will get providing you have upvoted it. Upvoting content without resteeming works as well.

Talk it out with the person who flagged you

Many users are active either on Steemit.chat or on Discord. If you figure out how to reach out to them you can have a discussion with them. The result of this may be that they remove their flag from your post because you’ll either have a chance to explain what you meant by what you wrote or you will come to a mutual agreement.

Forget it and move on

You can do nothing and keep working on your blog as normal. That’s probably the easiest thing to do. Worrying about every flag is a waste of everyone’s time, even though they’re upsetting.

Q: Can I flag someone I disagree with?
A: Yes. You don’t need anyone’s permission to flag.

Q: Can I flag someone who posted something that offends me?
A: Yes, but it may be better to just ‘mute’ them.

Q: He stole my money by flagging me.
A: No he didn’t. Your “money” or payout is decided over a week (7 days). It depends on positive votes, negative votes, and the current evaluation of the token you are being paid in. The token is not money until bought/sold and you are not entitled to anything until those 7 days are up.

Q: Why was my post/comment hidden?
A: Because someone flagged it.

Q: Where do I complain about a flag I received?
A: Nowhere. You deal with it yourself. Other fellow users will help you if it’s malicious and systemic with no just cause.

Q: Who helps people who were maliciously flagged?
A: Other fellow users. They can be found in the Steemit.chat ‘steemitabuse’ room. They are not required to help you and only do so out of their free will.

Q: Does flagging delete my post?
A: No. Nothing can remove your post from the Steem blockchain. It is there for the duration of the blockchain’s existence.

Q: Are flags by people who discriminate against me because of who I am allowed?
A: Yes. Steemit has all sorts of users, some who hate or disapprove of others because of race, religion, gender, etc. They are allowed to use their up-votes and down-votes. At the same time, they are a minority and other users who welcome everyone equally may choose to help and “reverse” the impact of they down-vote with their up-votes.

Q: If I flag someone will they flag back?
A: That depends on each individual. There is no way of knowing how a person will react to being flagged.

Q: What is a flag war?
A: A flag war is when users flag one another’s posts indiscriminately of the content because they want to hurt each other. A flag war should be resolved by the involved parties or it will go on until someone gets tired of it and stops flagging their opponent, leaves the platform, etc.

Q: How can I stop someone who repeatedly flags me?
A: You can’t control another person. Refer to the section titled “Recovering from Flags”.

Q: If I don’t agree with something how heavy of a flag should I give?
A: You should use your personal judgment and decide how much VP you want to spend and how much of an impact you want your flag to have. If you want to tell them that you mildly dislike their post because they plagiarized, you can issue a 1% down-vote like some bots do. If you find a post that you want to help hide from view (ie. it’s a phishing post), you can issue a 100% down-vote.

Q: Does flagging use up VP and Bandwidth?
A: Yes it does, the same as up-voting.